Fathom is a free app that records, transcribes and highlights your calls so you can focus on the conversation. It is the only start-up to be part of the 50 zoom app launch partners yet it is number 1 on the marketplace!

In this episode Ryan is joined by founder and CEO of Fathom, Richard White. He talks about his experiences in the start-up world across the years including working with the founders of twitch and selling a start-up on Ebay! He also talks all about his company Fathom and what they are doing differently, where he sees the future of tech going and why he believes there are just 10 go to market strategies.

To skip the Fathom waitlist simply head to the link below!
fathom.video/pod

“We’re human, we like seeing other humans, it really adds context to what is being said”

“There’s some % chance that any attendee at a meeting where fathom is being used, will lead to a sign up”

Do You Want The Closing Secrets That Helped Close Over $125 Million in New Business for Free?”  Grab them HERE: https://www.whalesellingsystem.com/closingsecrets

How do you grow like a VC backed company without taking on investors? Do you want to create a lifestyle business, a performance business or an empire? How do you scale to an exit without losing your freedom?
Join the host Ryan Staley every Monday and Wednesday for conversations with the brightest and best Founders, CEO’s and Entrepreneurs to crack the code on repeatable revenue growth, leadership, lifestyle freedom and mindset.
This show has featured Startup and Billion Dollar Founders, Best Selling Authors, and the World’s Top Sales and Marketing Experts like Terry Jones (Founder of Travelocity and Chairman of Kayak), Andrew Gazdecki (Founder of Micro Acquire), Harpaul Sambhi (Founder of Magical with a previous exit to Linkedin) and many more.

This is where Scaling and Sales are made simple in 25 minutes or less. 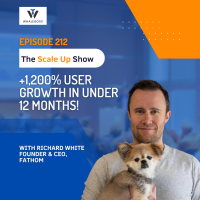 Growth of $100 million in under 3 years followed by an exit of $1.3 billion – Speaking with Founder and former CEO of Truebill, Yahya Mokhtarzada

Growing a Marketplace worth $95 Million in just 5 years! with Brendan King of Vendasta.

How to Create 300% Growth in 12 Months – with Tamas Kadar, Founder and CEO of SEON

The Number 1 Thing I learnt at HubSpot! Speaking with Peter Caputa IV on Building $6million ARR in six years at Databox

Selling Your First Company for $200,000 at just 17! Speaking with 2022 Best Global Platform Winner Pedro Goes, Founder and CEO of InEvent

2x CEO Creates 115% NRR in under 2 years! with Justin Beals of Strike Graph