Could you imagine doing motion capture work for Mortal Kombat? Even though Pek Pongpaet, the founder of Impekable Solutions, was lucky enough to do that, he still dreamed of becoming an entrepreneur. Since then, he started his company and bootstrapped it to become a 7-figure business. Impekable Solutions is now 10 years old and has been selected as an Inc. 5000 company 3 times in a row!

Pekstarted his career in tech as an engineer and then became a self-taught designer.

Although Pek had many ideas for projects back when he was still an engineer and designer, he could not execute any of them because they were never good business models.

Impekable Solutions typically serves the enterprise with their software development and software design PPC. They have done work for some of the biggest companies in the world, like Apple, Google, and Adobe.

It was a gradual process for Pek to work his way up to the point of working with some of the world’s biggest companies.

He started by making himself available for product design work. He worked very long hours. Then he hired an intern designer to help him, and his freelance business became a tiny agency. He finished his first year with two full-time designers.

The demand kept on growing, so Pek hired two more people, and the business grew organically.

They got their first big break with a large brand from working with a startup that was later acquired by LegalZoom.

Pek was trusted in Chicago. He was known to be a good designer, so Groupon, a Chicago company, hired him to do some work.

Motorola, also a Chicago company, was another one of their early big brand clients.

After working for big brands like LegalZoom, Groupon, and Motorola, Pekgot known for his good work. That helped him step up the ladder and get more work from big companies in the Bay Area.

If you are a founder and you are not yet out of the woods, step on the gas when you reach a point where you can breathe a bit. Remember that it is a marathon, not a sprint, so you need to pace yourself.

A CEO’s time is valuable for doing long-term strategic work. So pause, and become aware of making the best use of your time. When you have resources, make sure that you don’t go back to doing things you no longer need to do.

Pek only knows how to sell to people who know and trust him. His technique for getting a big company like Apple was to get an introduction from someone he knew.

Pek became very good at design and communications technology, so they eventually became partners with companies like Twilio and Adobe. Nike was using Twilio, and they were having a problem and needed some help. So Twilio introduced Nike to Pek and explained why they trusted him.

When you know something deeply, and you are trusted by a big brand and they recommend you, that will get you through the door.

Pek has real-life ninja skills, so he used to teach those skills to some club bouncers. When it comes to business, his ninja skill is relationships. Everything he has achieved is a result of relationships. That extends to his employees as well as clients.

Some tactics for building lasting relationships:
Keep in touch with people without having any expectations.
If someone you know changes jobs and starts working for a company you would like to work for, that will be a good time to check in with them. You can send them a personal note to congratulate them and ask if you can catch up with them once they have their bearings.

Apply here for a Revenue Growth Consulting Session with me, Ryan Staley.

The Third Door by Alex Banayan

Founders At Work by Jessica Livingston

You2 by Price Pritchett

Good to Great by Jim Collins 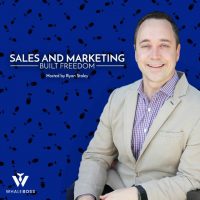